How to use Growth Hacking?

This is THE buzzword in 2020: Growth Hacking (well ok that’s 2, but you get the idea). In this article, we come back in detail to the definition of Growth Hacking, when and especially how to use it. We also talk to you about how we use it at ProspectIn. 😄

What is Growth Hacking?

There are a thousand and one ways to define what Growth Hacking is, so I’m going to try to use a fairly broad definition that cuts across the different aspects of the discipline:

Growth Hacking is using unconventional techniques and methods to generate rapid growth in a business.

Likewise, it is most often used in so-called “technological” or “digital” companies since the methods used almost systematically require the use and implementation of digital tools, in particular with marketing automation.

Before going into more detail on the use of Growth Hacking, it is also necessary to define the marketing concept of a sales funnel.

The sales funnel corresponds to the different stages through which your prospects will go. From their first point of contact with your brand/business; until they become loyal customers who recommend your products or services. In the vast majority of cases, it is necessary to go through one stage of the funnel before being able to move on to the next. 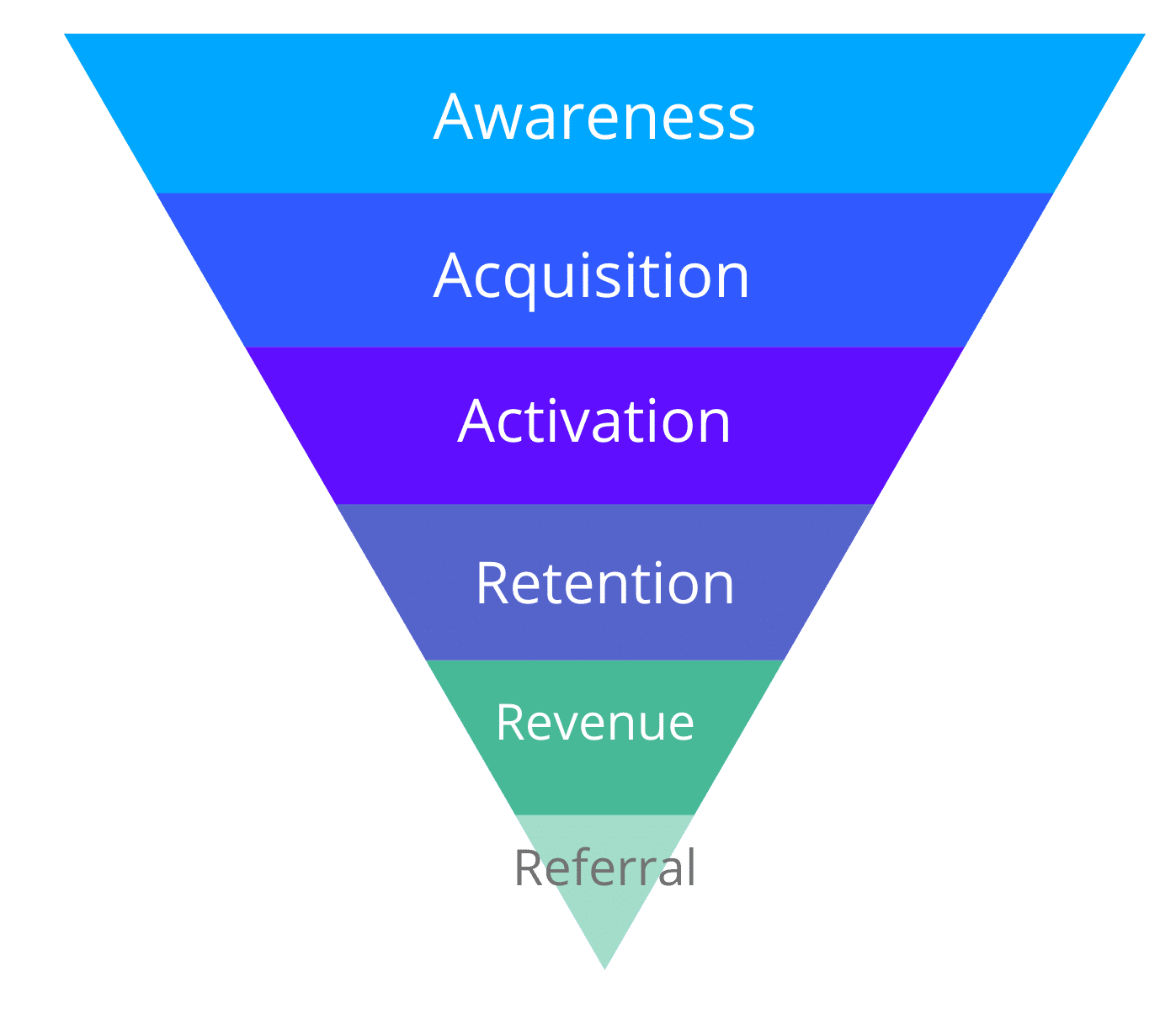 Sometimes the awareness stage is very subtle, even downright subliminal, but the mere exposure effect bias will plant a seed in the brain of your target, and the more it will be exposed to your product. or service, the more likely he is to go to the act of buying, which is why big brands such as world-famous Coca-Cola continue to flood billboards in their marketing strategies.

Your prospect is not yet taking action but is becoming familiar with your product or service, so when confronted with it, there is a good chance he will take action.

2. Acquisition: That’s it, your target takes the plunge, they are using your product or service for the first time, it’s the right strategy. In the case of an application such as ProspectIn, this step corresponds to the moment a prospect downloads the tool, it is our conversion metric! 👊

4. Retention: Corresponds to your ability to retain your prospects and make them long-term users. This step is often underestimated, but keep in mind that filling a pierced basket is futile.

5. Revenue: Your main objective, when your user/prospect takes the act of buying. He buys your service/product.

6. Referral: This is the grail. The moment your product or service sells itself “on its own” because the people who use it are talking about it. 😜

Okay got it, but where Growth Hacking fits in all this?

In the word Growth Hacking there is the word “Growth” (growth, that, you understand) and “Hacking” (there I feel that I am losing you 😂). The word “Hacking” is a bit misleading here, because in reality, it is not at all a question of carrying out any computer attack, it is not even necessary to have development skills or a computer science degree to use Growth Hacking techniques.

No, the word “Hacking” rather refers to the idea that you are going to set up a “trick”, a “trick”, which will bring you a disproportionate return on your investment. It should be borne in mind that Growth Hacking techniques are often techniques that require only a very low financial cost, but which can yield very large returns.

But to find the perfect hack, the one that will bring you exponential growth, the key is to iterate. You will have to test, measure, iterate. Again and again.

The more tests you perform, the more likely you are to find the perfect “hack”.

Where do you start, then, when you want to set up Growth Hacking techniques? At ProspectIn, we use a fairly straightforward method to put our testing ideas to work. An excel table with the following columns:

A. Which part of the funnel the test is supposed to have an impact on,
B. The description of the test,
C. The hypothesis,
D. The potential impact (from 1 to 10),
E. Confidence index (from 1 to 10),
F. Ease of implementation (from 1 to 10),
G. Expected result,
H. Iteration,
I. Actual result.

We prioritize the tests to be implemented by adding the potential impact (D.), the confidence index (E.), and the ease of implementation (F.). A high score indicates a test that needs to be set up quickly.

Alright, let’s get down to concrete examples. 🔥

How to set up Growth Hacking at each stage of a sales funnel?

Let’s go over the different stages of the funnel with an example of a “hack” at each stage, and avenues for reflection to carry out your own hacks.

A. Which part of the funnel the test is supposed to have an impact on: Awareness
B. Description of the test: publication on LinkedIn every day with all members of the team (one person per day) by boosting engagement with Podawaa,
C. The hypothesis: generates visibility on our personal profiles, which are all optimized, and make it possible to promote our products indirectly.
D. The potential impact (from 1 to 10): 6,
E. Confidence index (from 1 to 10): 7,
F. Ease of implementation (from 1 to 10): 8,
G. Expected result: generate 10,000 views per day on average over the week,
H. Iteration: the creation of fake accounts around a specific theme and publication on each account, 3 times a week, always boosting the reach of posts with Podawaa.
I. Actual result: more than 100,000 views per week on all of our LinkedIn posts to date.

Setting up this hack is relatively easy, you just need to have LinkedIn accounts, a little inspiration, and take advantage of Podawaa.

This hack is definitely one of the most powerful you can put together. Target a highly qualified and free database (LinkedIn) all in a fully automated way (ProspectIn) and with the possibility of scaling this process if it is successful (see: How to create a fake account on LinkedIn without getting banned).

A. On which part of the funnel the test is supposed to have an impact: activation and retention,
B. Description of the test: set up a system for sending an automated LinkedIn message with ProspectIn based on user behavior,
C. The hypothesis: allows users to revive users who downloaded the tool without going any further and those who have not used the tool for some time by offering them help if necessary.
D. The potential impact (from 1 to 10): 6,
E. Confidence index (from 1 to 10): 7,
F. Ease of implementation(from 1 to 10): 5,
G. Expected result: better understand the difficulties encountered and anticipate blocking points
H. Iteration: implement actions to remove blocking points in anticipation.
I. Actual result: improvement in the activation rate by 10 points.

This hack is already a little more complicated to set up, but it allows you to dialogue with your prospects/users and helps to retrieve extremely qualitative information on the use of the tool.

Growth Hacking is always closely linked with human psychology. It is about playing on the cognitive biases and on the heuristics of judgment of humankind.
In the case of this hack, it is about highlighting a total amount saved over the period rather than the amount saved per month. And it works. 😉

A. On which part of the funnel the test is supposed to have an impact: Referral,
B. Description of the test: setting up an affiliate program that shares 50% of the income generated by affiliates,
C. The hypothesis: allows part of the acquisition to be delegated to ambassadors who already have a community to which they can share the tool,
D. The potential impact (from 1 to 10): 7,
E. Confidence index (from 1 to 10): 7,
F. Ease of implementation (from 1 to 10): 7,
G. Expected result: generate 10% of turnover through affiliation.
H. Iteration: automate commission taking via a third-party tool,
I. Actual result: <5% of turnover generated through affiliation.

The referral is often extremely difficult to “crack”. Many have tried it, few have succeeded, but when it works, the results are exponential.

We do not claim to have cracked the referral, but this hack is relatively easy to set up and ensures some word of mouth. No need to go through a commission-taking automation system until you have achieved significant income through this channel.

Do not hesitate to contact me on LinkedIn to give me your feedback on this article, and on the best hacks you have implemented 🚀 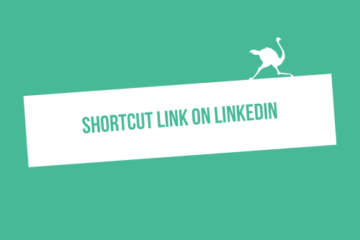 How to shorten a link on LinkedIn and personalize it?

Reading time/Temps de lecture : 5 minutes Rate this post How do I get a shortcut link on LinkedIn? No miracle, personalization is the key to a good conversion rate in a prospecting approach. 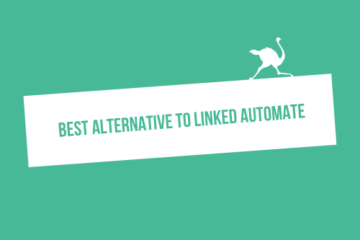 ProspectIn is the best alternative to Linked Automate

Reading time/Temps de lecture : 4 minutes 5 / 5 ( 335 votes ) Linked Automate is a new tool on the B2B prospecting market on LinkedIn. With a name inspired by Linked Helper, and “automation marketing“, this tool is far from Read more… 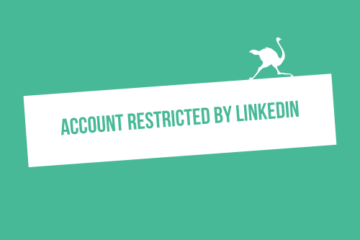 Reading time/Temps de lecture : 7 minutes 5 / 5 ( 192 votes ) Is your account restricted by LinkedIn? You are in the right place.