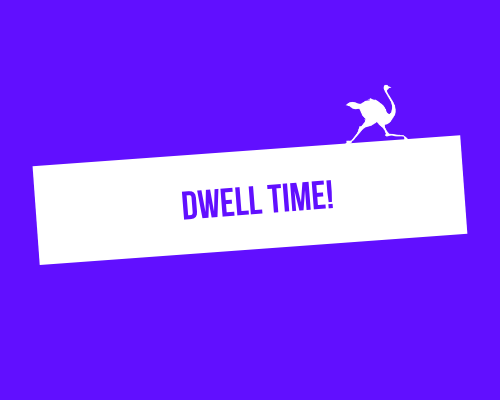 LinkedIn’s Dwell Time is a bit like a sex discussion between prepubescent teens: everyone is talking about it but no one really knows what it is. 🤪

Summary
1) How does the algorithm work so far?
2) Why Dwell Time?
3) Dwell Time = time spent on a post?
4) What’s behind all this?
5) The use of this modeling in the appearance of posts

It’s time to clarify this a bit. And tell you what it really means!

How does the algorithm work so far?

Before talking about “Dwell Time“, it is important to talk about how the algorithm works. I have already done a detailed article on the subject, but here is a summary.

Every day millions of posts are seen on LinkedIn.

To connect the two: an algorithm that will determine who should see whose post.

Since Linkedin earns money from ads, and these are displayed every 5 posts, it is necessary to scroll as many posts as possible for users to generate maximum income.

This means showing the most interesting posts.

But since the algorithm is not smart enough to understand the content of a post and determine if it is “interesting”, it will be based on the interactions of users with the post (along with other criteria such as an external link, a video, an image etc…  that can influence the reach).

Until now, the interactions studied by the algorithm corresponded to engagement: the number of likes received and the number of comments published at the beginning of the post’s life. Comments having much greater weight than likes.

There are two main reasons for Dwell Time. The first is the most important and the official version.

The second is secondary and unofficial.

You should know that on a social network, we observe the following distribution:

LinkedIn, therefore, asked: how to take into account the opinion of the 90% who do not interact?🤨 How do we get the behavior of the 90% to help us determine the quality of a post?

On the other hand, engagement actions are binary. This poses two problems:

This second point corresponds to the unofficial reason: to limit the impact of pods.

Measuring the quality of a post and therefore defining its organic reach by what LinkedIn engineers call “viral actions” is therefore too crude an approximation.

They also explain that clicks on a link or “see more” of the post can be misleading indicators because the user can immediately leave the open page or not read the rest of the post.

Similarly, indicators such as sharing are not very reliable because it is impossible to objectively analyze the comment associated with sharing. Is it sharing to denounce someone or highlight quality content?

It’s time to find other indicators and put a little dose of Artificial Intelligence in all of this. 😉

You are probably not on this post by mere chance. And for you, Dwell Time is certainly synonymous with “time spent on the post”.

It is an approximation that is almost true 😁. Let me explain.

In order to give weight to the behaviors of users who do not interact and get a more reliable and linear indicator, LinkedIn’s engineers sought to study another type of interaction: the time spent on the post. 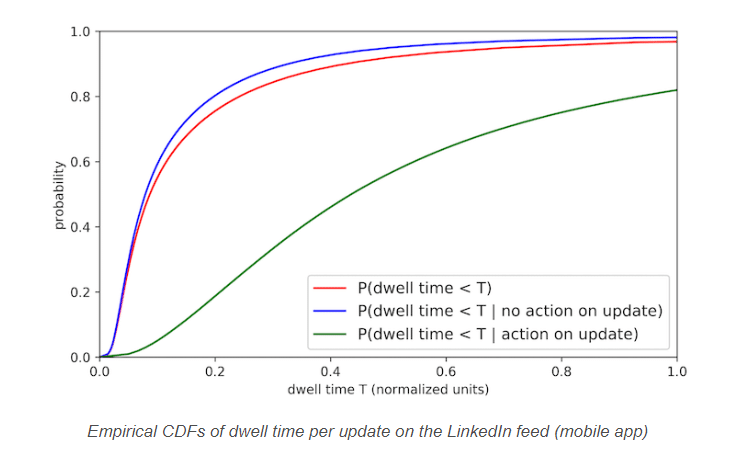 (That’s quite a basic and logical reasoning, but behind all that there are beautiful algorithms and frightening mathematical functions 😜).

The engineers divided the time spent on the post into two parts:

The time spent on the post will therefore positively or negatively influence the algorithm and therefore the scope of the publication.

What’s behind all this?

The idea of ​​this article is to simplify the one produced by the engineering team of LinkedIn. So I’m not going to show you all the mathematical formulas behind it.

But it’s still interesting to understand what is behind the Dwell Time because it is more complex than simply “the time spent on a post”.

In their article, the engineers present a specific case that they studied to integrate the time spent on a post in the algorithm. Which suggests that this is not the only modeling that comes into play. 🤔

They thus integrate the “probability that a post is passed without being read“. This is a fairly short period of time, below which the probability of making an engagement on the post is close to zero.

They thus integrate the notion of “Skipped post” which will also influence the algorithm.

Note that this period of time is almost the same on the different types of posts (video, image, article, pdf file…), which facilitates the modeling and use of this indicator.

The use of this modeling in the appearance of posts

It should be understood that LinkedIn does not work in terms of “does this post deserves to be seen?” but “what is the most relevant post to display to this user?”

Thus, the algorithm will integrate different criteria, such as the user profile, the virality of the post (number of likes and comments), the affinity of the user with the author of the post and other indicators such as time of day.

By combining these criteria, it will determine the probability that you will read a given post and then prioritize the posts that have the highest probability of making you stop to read them.

This algorithm’s update would have significantly increased the quality of the news feed by reducing the number of “skipped” posts and therefore increased the relevance of the content offered.

This article has been written on the basis of the article written by the LinkedIn team of engineers in charge of the publication algorithm and Dwell Time. I tried to synthesize it by drawing the most important information while trying to be as clear as possible, based on their explanations. Unfortunately it is the only official LinkedIn resource on the subject.

The way the algorithm works and the exact integration of Dwell Time into the reach of publications is not fully disclosed. The modeling integrates complex mathematical functions and machine learning.

So it’s much more complex than something binary.

The engineering team said that there will be continuous updates to this algorithm, so as to improve the suggestions and make it more relevant.

However, there are a few good practices that can help you to take advantage of Dwell Time. I’ll tell you about it in an article soon. 😉

In the meantime, do not hesitate to contact me on LinkedIn to discuss the article and tell me if something is not clear.

Categories: Our articles on LinkedIn 5 minutes Rate this post Do you use LinkedIn a lot and have questions about it? Do you want to access to LinkedIn help or contact the customer service? Don’t panic. We will help you. Stay calm, Read more… 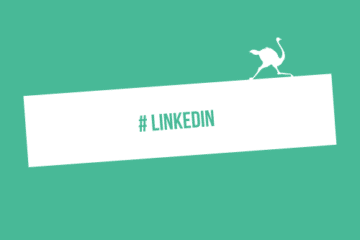 How to use linkedin hashtags?

2 minutes 5 / 5 ( 133 votes ) You can find on all social networks, these different combinations of letters and numbers just after the # symbol, following each other in different places. This is called Read more… How to use Linkedin Pulse?

2 minutes 5 / 5 ( 133 votes ) According to a study conducted by Hubspot, visitors from Linkedin convert better than those from other social networks. It is therefore important to know all of its features Read more…